At long last my graphic novel Psychiatric Tales has been published. 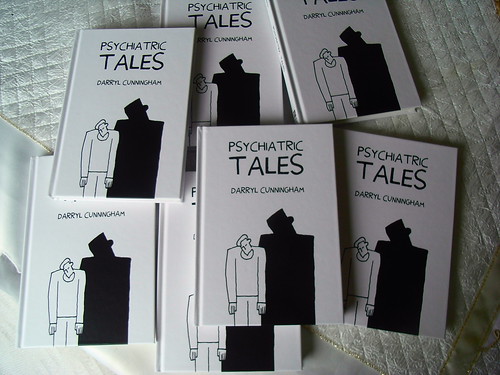 Psychiatric Tales is a book that attempts to demythologise mental illness. Forget what you've seen in movies or on TV. This book shows what the experience of mental illness actually is for both patients and the staff who treat them.

Media representations of people who suffer mental illness tend to be appalling. We live in an age where racism and sexism is considered unacceptable. Yet the mentally ill are still considered fair game for ridicule and are subject to the worst kind of prejudice. I had an e-mail recently from a young man who intended to buy two copies of the book when it came out. One for his mother, and one for his step-father. He wanted to show his family that the bipolar disorder he'd been diagnosed with, was a real illness, and that he needed their understanding not hostility.

We still live in a world, sadly, where depression is seen as weakness of character, and psychosis (such as hearing voices) is considered proof of dangerousness. Even the psychiatric nursing profession itself suffers prejudice. I've worked with many general nurses who considered psychiatric nurses not to be real nurses at all.

I'm hoping that Psychiatric Tales will be a real stigma-busting book. An empowering book for those who suffer the illnesses described, and a insight into a much-misunderstood world, for those who know little of the subject.