It seems I'm becoming something of a celebrity, at least in a small way. I made number one on Reddit the other day, I've been featured on Boing Boing. Many folk have been discussing Psychiatric Tales on Twitter, including Graham Linehan of Father Ted and The IT Crowd fame. I've also had about eighty emails. Far more than I can ever reply to and they're still coming in.

The vast majority of the emails have been positive, some a little critical (which is fair enough) and only one insulting (why am I defending violent crazy people, etc).

Boing Boing got their facts wrong when they reported that I'm a student nurse. I haven't been a student nurse for years and never finished my training anyway, (due to my own mental health problems). I'm currently working in a residential home for the elderly.

It's a very exciting time for me.

Here's a frame from the current chapter of Psychiatric Tales I'm working on, which is about the grim subject of suicide. 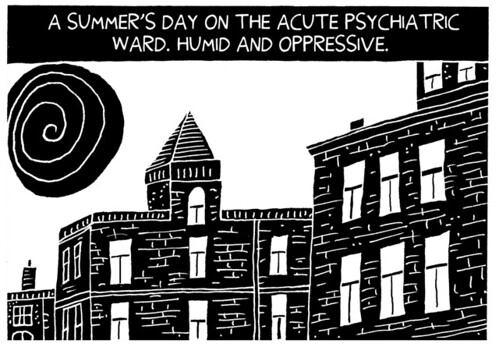