I dreamt that I was in hospital, a patient on the very psychiatric ward I used to work on. A dream I've often had in the year since I started suffering so badly with anxiety and depression. In the dream, I felt humiliated to find myself being treated by nurses who were previously my colleagues. I'm not in touch with any of these people now, as I don't want them to know how badly things have gone for me since I left the hospital. One day things will change, but I'm finding the dark feelings I've experienced hard to shrug off.

Generally though, I'm a great deal better, thanks mostly to the huge amount of support I've been shown by the fine folks on this site and elsewhere.

The bank continues to be a worry. A mini-statement I got out of a cash machine tells me that a couple of hundred quid has vanished from my account in an "inter-branch-payment." I've no idea what that is and I won't know until I go into the bank tomorrow morning and ask. It's certainly not either a bank charge or interest, as those items are listed separately.

My computer keeps freezing for no apparent reason. It's not been right since the move from Newark. I'm terrified that it'll completely fail, as there's no way I could get it repaired or replaced.

I've already finished this weeks Forbidden Planet comic strip, even though it's not due in until Tuesday. I'm attempting to get way ahead of the deadline. 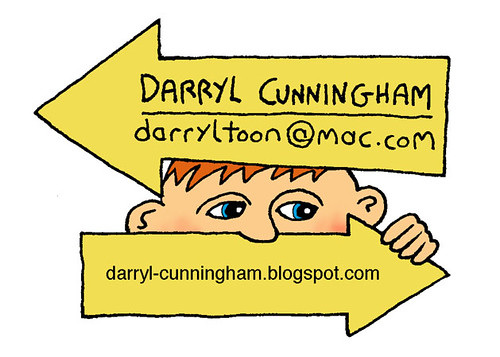 My business card design. I print these out from my own printer on card, and then draw a little doodle on the back of each one, so that each person who receives one gets their own tiny piece of Darryl art. darryl-cunningham.blogspot.com/
Collapse