I've been absolutely blown away by people's response. It's amazing. I've been hugely inspired by the kindness that you, dear reader, and so many others have shown me. It's hit me like a lightening bolt, re-energising me and giving new purpose and direction. And people say the internet is a waste of time.

I've now being paid to do a regular weekly strip for a certain retail chain's website (more details on this when I've developed a few ideas), and traffic to my art blog has boomed. I've got to really capitalise on this interest and new found energy and not slump back into inertia.

My immediate financial concerns have been resolved, and that being the case, I just don't feel it would be right to keep taking money off people. It's begun to feel a bit greedy. I've been given the breathing space I needed. The rest is up to me. I can even give my parents some money towards their bills and thus not feel that I'm entirely sponging off them. All is well, thanks to you.

I'm in the middle of emailing people to thank them for their help, but there's been so many, that I'm still only half way down the list.

Super-Sam and John-of-the-Night. Imagine a vain, egotistical, slightly stupid liberal character, teamed up with a neurotic, paranoid, but smarter, right-winger. This the idea behind Super-Sam and John-of-the-Night. Yes, they're basically the Superman and Batman archetypes that we've seen a million times already, but who couldn't have fun with this idea, and anyway, I haven't done it before. 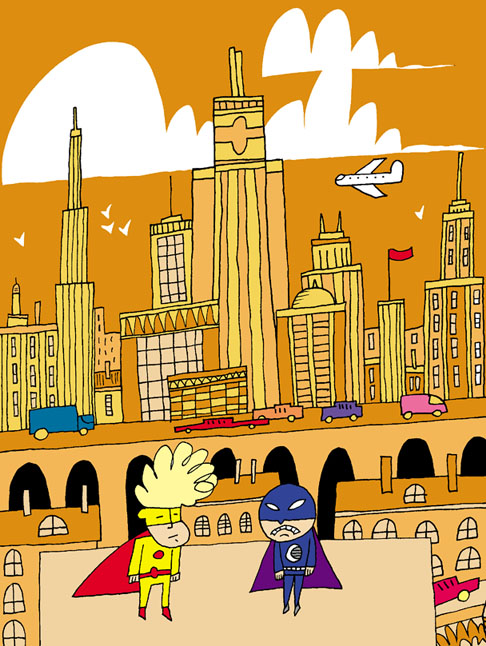