This morning I was due to go down to Nottingham for my interview with the nursing agency. However, I had to ring and cancel, because the Job Centre rang me, asking if I would come in and see them at one o'clock. This concerning my job-seeker's allowance, which had been stopped, because it had been ruled that I wasn't entitled to it (see last entry). The irony that the Job-Centre stopped me from going to an interview, doesn't escape me. The rescheduled interview will now take place on Tuesday morning.

Weather: humid and rainy. With my umbrella to the fore, I walked up there, arriving half an hour early so I could look through the papers and check for jobs on the computers. The guy I saw was extremely helpful and sympathetic. He guided me through the appeal process in more detail than I cared to hear. I wrote out a long explanation of why I'd left my last job and signed it. Mr Man reckoned that it would take two weeks for my appeal to go through, but he thought that my reasons were sound and that I'd get a positive decision. But who the hell knows?

Fat man in the rain. This isn't me. Honest. 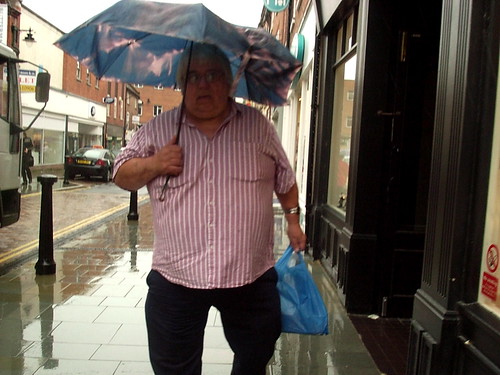