While in Nottingham at the weekend, I had a glasses disaster. I was walking through an indoor market in one of the huge shopping precincts that city has, when the lens just flipped out and clattered across the tiled floor. The lens was unbroken, but the tiny screw that had been keeping in place, was lost. Yes, I could have spent time crawling around on the grimy floor in a half-blind manner, in the vague hope of finding it, but I decided not to.

Instead I went to the nearby Boots opticians to ask if they could fix it. The guy who initially served me was a little person (I've no idea what the politically correct term is). He told me to take a seat and I had to wait about an hour. It was worth it, however, because they fixed it and charged me nothing.

Conversation I had with the optician.
Me: "I've got a screw loose."
Him: "Haven't we all?"

Newark, Northgate Railway Station. I can't get enough of these convex mirror photos. 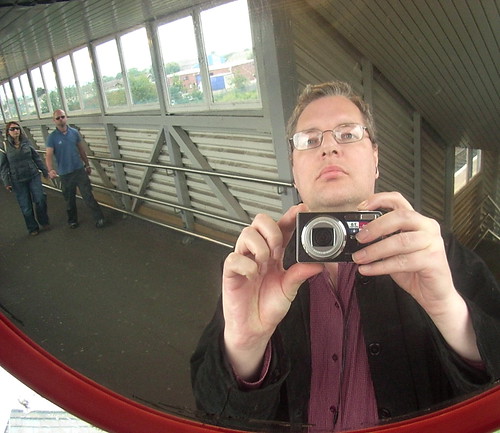