Every likes a picture of a kitten. Don't they? 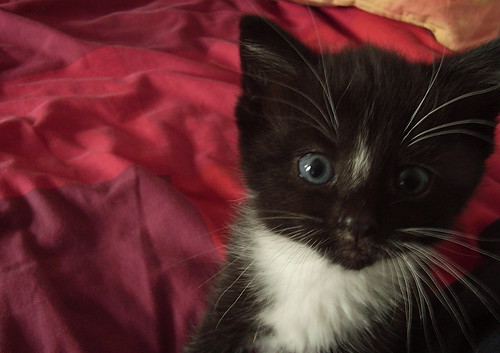 I've got a job interview tomorrow. It's a National Health Job, working at the local hospital on their psychiatric ward. Very similar to the work I've done before and where I've got seven years experience. So as long as I don't blow the interview I should have a good chance of getting it. I could certainly do with a job. I really need to pay off my debts.

Things are OK here. My relationship with my brother has much improved, although I wouldn't say we're fast-friends or anything. The other person who lives in the house, who I will call Jackie, is a nice women, kind-hearted, and often helpful. However she's not the brightest of people. This is someone else who I have nothing in common with. Jackie is also an alcoholic. She often shuts herself off in the front room to drink. I think she really believes that we don't know she's drinking. She, of course, protests that she's not. Personally I don't care whether she drinks or not, but she should at least be honest about it.

Here is a rather cruel joke about alcoholics. How do you know when an alcoholic is lying? When their mouth moves. Very unfair, I know, but addicts do lie and they lie all the time. If your a carer or a health worker, then you'll know, that it's the lies which cause the most trouble and emotional burnout for people.

My brother has two cats here, one of which gave birth to three kittens a month ago. One of the kittens has gone to a neighbour, but we're still on the lookout for someone to take the remaining two.
Collapse