I remember, back in my twenties when I was working in a crummy laundry, my boss there took me to task because I had a belief in evolution. This woman wouldn't buy that she might be descended from apes (as she put it). I don't think this view came out of any religious belief she might have had, but simply out of snobbery. If we're descended from apes, she said to me, how come apes are still around? She was smirking in victory as she said this, really thinking that she'd got me. I tried to explain to her, that this was a common misconception of evolution, and that Darwin's theory, amongst many things, stated that hominids (guerillas and humans amongst others) derived from a long-gone common ancestor and not from each other. It's much like believing that zebras and horses are descended from each other, rather than thinking that these animals derive from a much earlier form (which is the truth). Even if there was no fossil record for us to look at, genetics itself has delivered vast proof about how natural selection works. Evolution isn't a theory. It's a fact, and has been proved so, over and over, for decades.

Naturally I utterly failed to convince her. She either wouldn't or couldn't except my explanation.

Humans, despite our scientific achievements, struggle to think critically. We can all be stupidly gullible at times, credulously believing the dumbest things, because we're creatures of emotion, and our hopes, dreams and fears often get in the way of clear thinking. Who wouldn't want to believe in life after death? How cool would it be if they found Bigfoot or the Loch Ness Monster?

It's often uncomfortable for humans to stare facts in the face because the truth can be extremely painful, as it can force us dispense with many of our much-loved and comfortable beliefs. I prefer to live in the cold reality of a godless universe than to delude myself with fanciful things. It's kind of bracing, you know?

Bird on roof at dawn. 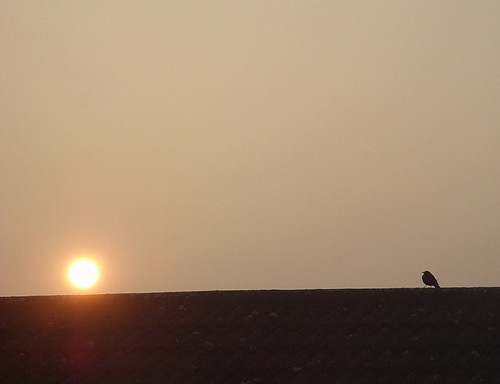