Being a lazy artist, I don't do many drawings which make use of foreshortening (objects receding into the distance), as I find it difficult. Old time comic artists like Jack Kirby were phenomenally good at perspective. Gigantic hands in the foreground with bodies receding to a point were a speciality. These guys drew every day for decades and so could draw anything from any point of view. I've been reading some Marvel Comic book collections of Kirby stuff, and found myself as staggered by the invention of The King, as when I was a kid.

Anyway, here's a little foreshortened view of Superman. It may need a little more shading yet. I haven't decided. 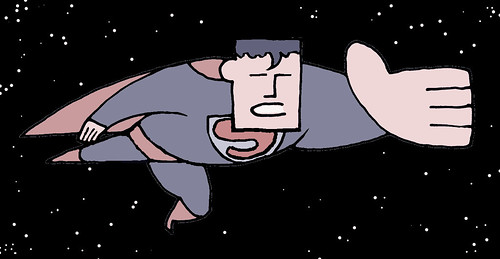 And what did I think of Superman Returns? I thought it very good film rather than a great one. Perfectly cast, Brandon Routh did the impossible and made me forget Christopher Reeve. He was like a young Gregory Peck. The film is flawed because it's perhaps too long for its story and drags towards the end. There is much to enjoy though. What are your thoughts?
Collapse